Did you know that it’s important for guinea pigs to chew on certain things?

Yes! Turns out, guinea pigs have teeth that never stop growing and in order to maintain their health, your guinea pig will always be looking for things to chew on.

However, that doesn’t necessarily mean that they can chew on just anything – in fact, experts have pointed out certain things that guinea pigs can chew on 24/7 without tacking up on the calories.

There are various things that guinea pigs can chew on – but that doesn’t mean that they’re safe!

There are things, however, that your guinea pigs can chew on safely for whatever reason.

You can buy most of these items at the local pet store or even find some in your backyard, thanks to fall!

Easily found in pet stores, sticks are guinea pigs’ favorite things to chew on. Not only are they organic and natural, but they’re great for a guinea pig’s teeth. 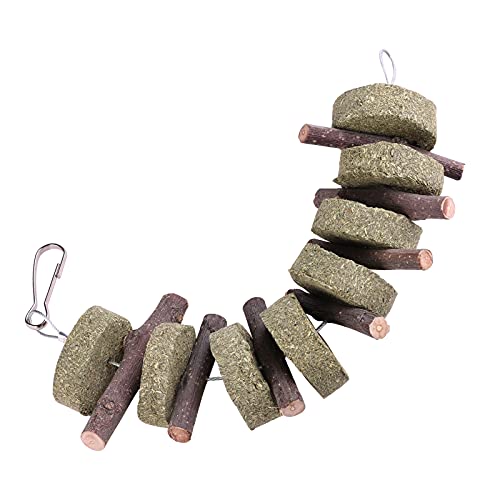 They usually come in small packs and are short in length, so you don’t have to worry about breaking them or splintering them

Just pop open a pack, drop a few sticks into your guinea pig’s cage and that’s it.

If you have the option, pick sweet fruit sticks – they’re similar to the food a guinea pig eats and are safer.

Pet stores usually have hay sticks, which is hay but in stick form. 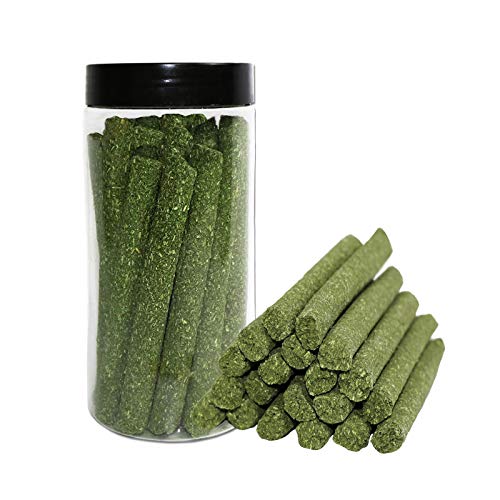 Untreated and safe for guinea pigs, try putting a few hay sticks in your guinea pig’s cage to give them something healthy to chew on.

According to research, hay is good for a guinea pig (not as food, but as chewable).

You can even mix up the hay sticks with some other sticks like the fruit ones mentioned above.

The tons of brands that make hay sticks for chewing make sure to retain their high quality so that the guinea pig can easily maintain its teeth.

Get a small haystack and place it in your guinea pig’s cage. 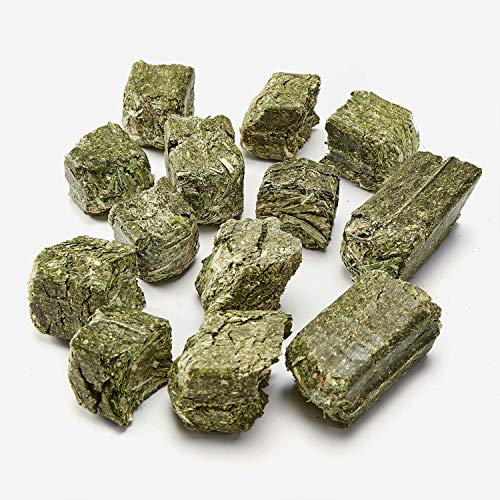 Turns out hay is actually very good for chewing because that way a guinea pig is able to grind its teeth and wear them down more efficiently without tiring.

Furthermore, hay is good for guinea pigs’ digestive system, so this edible chew keeps them busy while helping their health, too.

The best part is, there are various untreated hays for you to choose from – and it’s pretty cheap!

You can even place some grass mats in your guinea pig’s cage to provide a safe object to chew on. 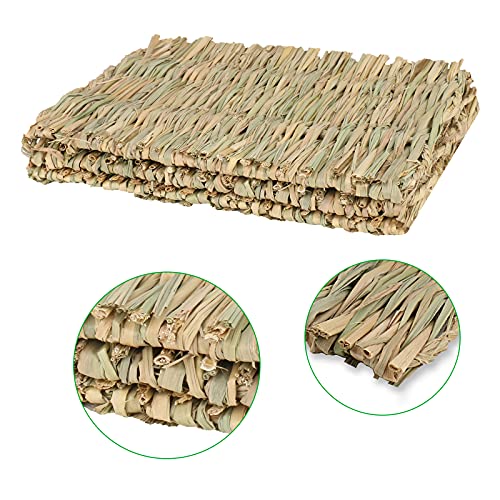 Available in pet shops, these mats are hand-woven and made from soft threads and wires, which are chemical-free and totally safe for your guinea pig to chew on and wear down their teeth.

They’re also edible and contain fiber, which is always good for your guinea pig in between meals.

The best part is that these grass mats don’t wear out quickly, so one should last your pet for quite a while until you need another one.

If you can’t find any other form of sticks for your guinea pig to chew on, twigs are a great alternative.

Not only are they cheap, but they’re pretty great for your guinea pig’s teeth.

The most popular twigs to give your guinea pigs are apple branches, beech, birch, pear, and hazelnut.

These are some of the safest wood that guinea pigs can chew on because not all wood is good for them – some can be poisonous, too!

Cardboard boxes are the easiest chews to get your hands on because they’re practically lying around in every home!

They make great little hideouts for the guinea pigs and are also perfect for chewing.

So put a tiny hideout made from folded cardboard or throw in some wide scraps in their cage.

However, a drawback of using cardboard is that it can get wet pretty quickly, so you’ll be cleaning up some goopy mess from your guinea pig’s cage every now and then.

Also, opt for cardboard that’s been minimally treated and remove any staples, tapes, or ink before giving it to your pig.

Untreated and made from wood that’s safe for guinea pigs, woodblocks are some of the best chews to give to your guinea pig.

They take time to wear down, so your guinea pig can take its time working on its teeth.

Avoid woods like cedar and pine, though. They contain certain compounds that can harm your guinea pig’s respiratory system, so play it safe and get blocks made from beech, hazelnut, birch, etc.

The best part is that they’re pretty cheap, too!

Paper rolls also make great chews if you don’t have anything strong or more durable at hand.

Rolled paper towels and bunched-up toilet paper stuffed with some hay are an absolute delight for guinea pigs.

Some guinea pig owners swear by this because it doesn’t break the bank and is totally safe to use, too.

However, if you do plan on using paper rolls, make sure the paper you use is unbleached and doesn’t have any fragrance or dyes – these can be harmful to the guinea pig. 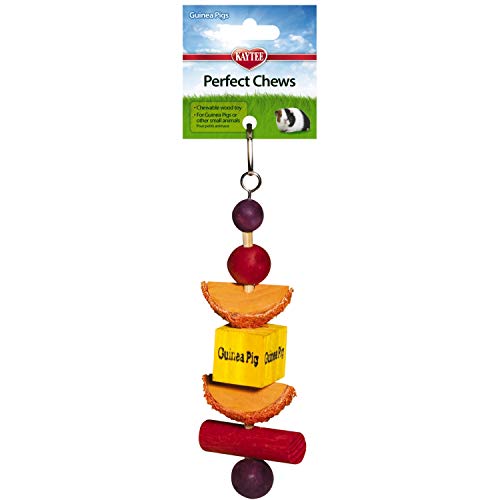 Cute, right? They’re small, long-lasting, and made from a material that is non-toxic and designed to help wear down the guinea pigs’ teeth properly.

Typically made from safe hardwood, which is natural and healthy for the pigs, you can get super cute chew toys in the shape of ladders, swings, tiny barrels, and so on to adorn your guinea pigs’ cage.

Many pet owners do like to decorate their pets’ cages with cute toys that are functional and look good. 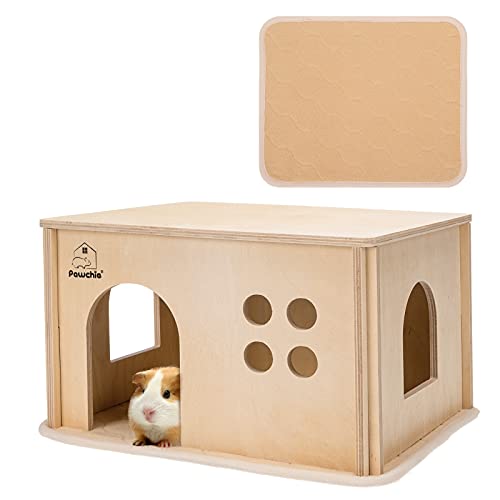 Try getting a cool wooden hideout for your guinea pig’s cage, it’ll double up as a napping spot and a chew toy!

Wooden hideouts come in various woods and sizes, so depending on the size and age of your guinea pig, pick the best one and add it to its cage.

They’re also durable as compared to most other chew toys, so one should last you for a long while.

Why Do Guinea Pigs Need to Chew On Things?

It’s also a good idea to understand why guinea pigs need something to chew on all the time.

Besides food, guinea pigs need other things like the aforementioned ones to constantly chew on.

It’s normal for a guinea pig to bite things in their cage, like wooden toys, and a lack of chewables will result in them biting their cages!

Turns out, chewing is an instinctive behavior for guinea pigs.

The animal kingdom is pretty interesting and a curious thing and guinea pigs come under that category.

They’ll practically chew on anything so make sure that they have tons of objects lying around in their cage for them to chew on.

A lack of chewables can actually stress out a guinea pig and some will even start to bite the wires on their cage.

So make sure that besides food, they have something to chew on.

To Wear Down Their Teeth Which Are Ever-Growing

Guinea pigs have teeth that never stop growing and they need to wear them down to maintain them.

Chewing objects give them the perfect opportunity to do just that. They need to grind their teeth down in order to maintain their health.

Even crunchy fresh vegetables are recommended for their diet to enable more grinding – and also to avoid the pigs from chewing on things like plastic or the metal cage.

Guinea pigs are actually very active animals, which is why they’re usually bought in pairs so that they have company and entertainment.

A highly bored guinea pig will display signs of distress if it doesn’t get enough mental stimulation.

To provide your little piggy with enough chewing toys, especially if you have just one. This will keep them busy and engaged.

What also works especially well is if you play hide and seek with the chew toys!

With so many chewing options to choose from, your guinea pig should be busy for hours at an end and also have healthy teeth!

However, if you do notice a chipped tooth, do take your pig to the vet.

Also, make sure that the toys or chewable that you give to your pig don’t have sharp edges or splinters that could hurt their paws or gums – the idea is to provide the pig with a durable object to grind their teeth again.

It’s also a good idea to speak to your pig’s vet and find out what chewing objects work well for your pig depending on their age, size, and dental requirements.

Here’s to a happy guinea pig!

Do Cats and Guinea Pigs Get Along?

How Do Guinea Pigs Communicate?

Do Guinea Pigs Play with Toys?